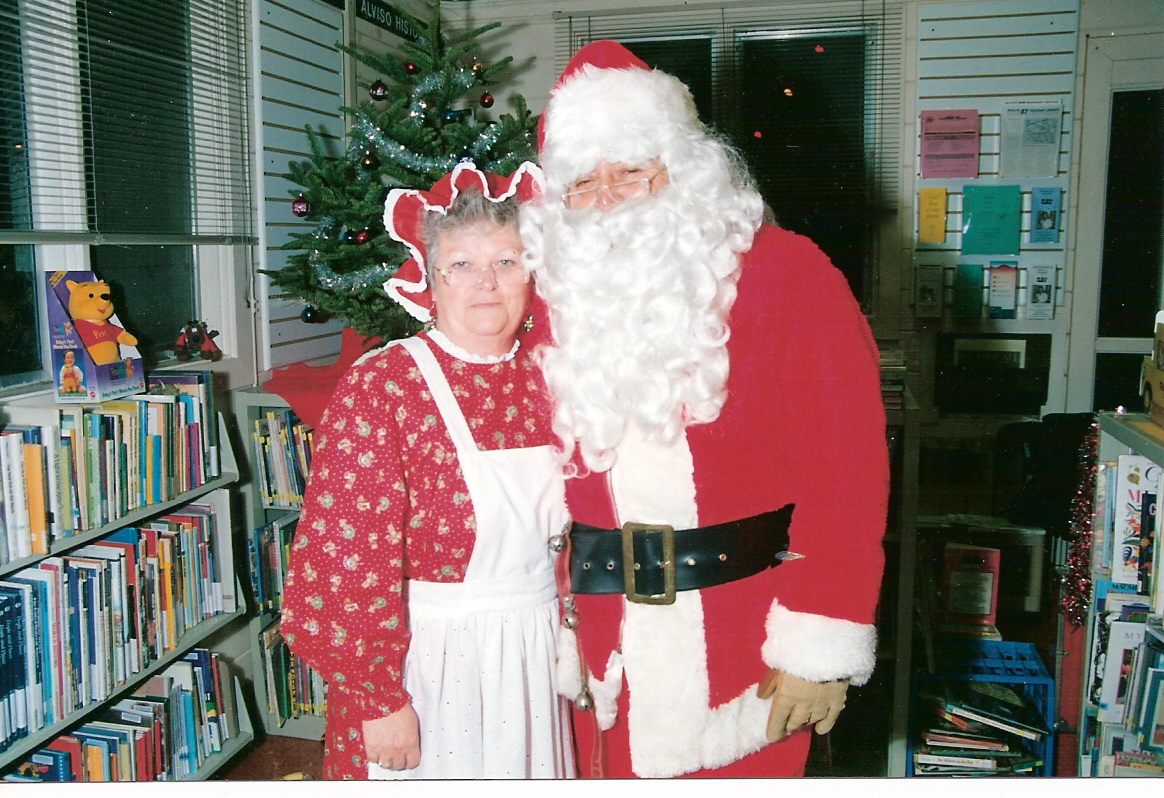 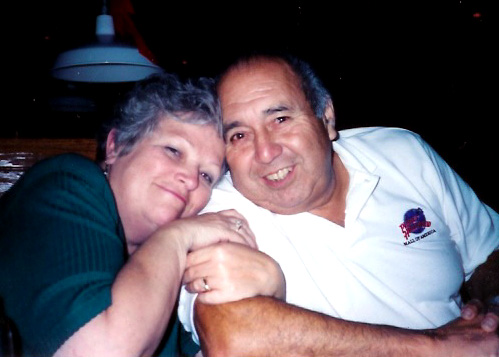 This page is dedicated to the Memory of Joe Guadalupe Santiago Sr., the original Alviso Santa, through whose effort the Santa Visits Alviso Program was founded, nourished over two decades, and continues to grow so that we may ensure the future of our children. 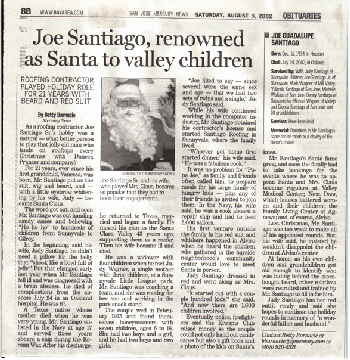 The photo above is that of a quarter page spread done by the Mercury News in recognition of Joe Santiago Sr. and his contribution to the Santa Clara Valley. It was done not at the behest of the family, but because the Mercury News felt he was due this tribute. An honor rarely accorded a local person without “celebrity” status, Joe would have been the last person to feel that this was his due. The text of that article is as follows, written by staff reporter Betty Barnacle.

As a roofing contractor, Joe Santiago’s hobby was a natural – what better person to play that jolly old man that lands on rooftops at Christmas with Dancer, Prancer, and company?

For 21 years, ever since his first grandchild, Vanessa, was born, Mr. Santiago put on the suit, wig, and beard and – with a little eyebrow whitening by his wife, Judy – became Santa Claus.

The word got out, and soon Mr. Santiago was handing out candy canes and bellowing “Ho Ho Ho” to hundreds of children from Sunnyvale to Gilroy.

In the beginning, said his wife, Judy, he didn’t need a pillow for the belly that “shook like a bowlful of jelly.” But that changed early last year when Mr. Santiago fell ill and was diagnosed with a brain abscess. He died of complications from the abscess July 24, 2002, in an Oakland hospital. He was 67.

A Texas native whose mother died when he was very young, Mr. Santiago enlisted in the Navy at age 17 and served three years aboard a repair ship during the Korean War. After his discharge, he returned to Texas, married and began a family. He moved his clan to the Santa Clara Valley 43 years ago, supporting them as a roofer. Then his wife became ill and she passed away.

He was a widower with four children when he met Judy Wagner, a single mother with three children, at a Sunnyvale Little League Park. Mr. Santiago was coaching a little league team, and she, while working in the park snack stand, was rooting for her son who was playing on an opposing team.

“Joe liked to say – since several were the same sex and age – that we had three sets of twins and a single.” Judy Santiago said.

While his wife continued working in the computer industry, Mr. Santiago obtained his contractors license and started Santiago Roofing in Sunnyvale, where the family lived.

“Whoever got home first started dinner,” his wife said. “He was a fabulous cook.”

It was no problem for “Papa Joe” as family and friends often called him, to prepare a meal for his large family of hungry kids – plus any of their friends he invited to join them. In the Navy, his wife said, he was a cook aboard a repair ship and had to feed 2,000 sailors.

His first venture outside the family in his red suit and whiskers happened in Alviso when he heard the children in the bayside neighborhood’s community center would love to meet Santa in person (*footnote).

Judy Santiago dressed in red and went along as Mrs. Santa Claus.

“It started out with a couple hundred kids,” she said, “And now there are 600+ children involved.”

Eventually police, firefighters and the Rotary Club raised money so the couple could not only hand out candy canes but also a gift book and a photo of the kids on Santa’s knee.

Mr. Santiago’s Santa fame grew, and soon the family had to take bookings for the event where he was to appear. Santa and Mrs. Claus became regulars at Valley Medical Center; Next Door Solutions to Domestic Violence (which houses battered women and their children), the Family Living Center at Agnew, and, of course, Alviso.

Last Christmas, Mr. Santiago was too weak to make all of his appointed rounds. But, his wife said, he insisted he wouldn’t disappoint the children at Alviso’s center.

At home, as his own children and grandchildren got old enough to identify who was hiding behind the storebought beard, other relatives were recruited and trained by Mr. Santiago to fill in for him.

Judy Santiago has her red outfit ready and said she hopes to continue the holiday rounds in memory of “a wonderful father and husband”.

(*footnote) What the report didn’t say was that first year Santa came to Alviso, the community had been under several feet of water. Christmas, to say the least, was going to be a bleak affair with homes flooded and presents ruined. Mr. and Mrs. Santiago brought smiles to the faces of not only the children, but their parents. They gave hope to the residents whose holiday season was in shambles. After Santa came, everyone knew it was going to be alright. They were going to survive and carry on.